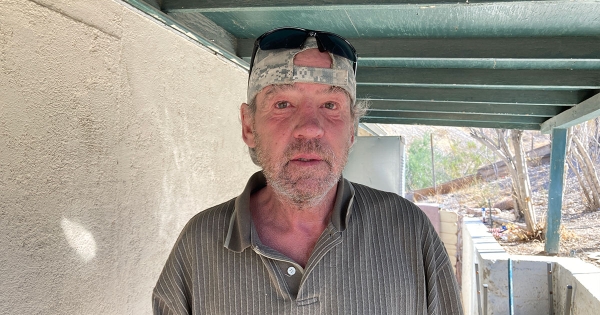 Shawn served six years in the U.S. Army’s airborne forces, but it all came to a sudden end when he was shot, suffering a brain injury. He received an honorable discharge. It was 1985 ... a long time ago.

Shawn struggled to put down roots. He wandered the country, exploring the nation he had defended. For years, he hopped trains and moved from city to city. One week in California, a few weeks later working on a Montana ranch in exchange for room and board.
When his rambling finally brought him to Arizona, he decided it was time to settle down. But he had no home, and no means of getting one. So he set up a tiny camp outdoors — up in an umbrella tree. He lived in the tree for a solid year. It’s a hard life, living outdoors.

Month after month, Shawn’s heart longed more and more for a new life. His despair was deepening.

When someone on the street mentioned Catholic Charities Veteran Services — suggesting that we might be able to offer him some help — Shawn sensed a flicker of hope. He made his way down out of the tree and walked to our office, only a short distance away.

The Catholic Charities team went to work right away, helping Shawn recover essential documents, including his Social Security award letter and bank statements. They guided him through the process of applying for a Veterans Supportive Housing voucher. When his first application was denied, we encouraged him not to give up, and helped him re-apply, sharing his story with the bureaucrats. The day his voucher was approved was a day of thanksgiving!

Shawn had already begun dreaming of living in a certain apartment complex, so we worked with the landlord to get Shawn approved. Shawn was finally home.

But he’s not content simply to enjoy this new life himself. His own experience revealed to him the needs of others in similar situations — and the potential for their lives to be transformed. Shawn devotes himself to helping other veterans in the neighborhood who are dealing with homelessness. He delivers meals and water to vets in a local park, and often introduces these veterans to us.

You can help veterans like Shawn who are experiencing homelessness. Your tax-deductible contribution to Catholic Charities may also qualify for Arizona’s Foster Care Tax Credit, you can also enjoy a tax benefit as you give. You can receive a tax credit (not just a deduction) for your giving to Catholic Charities — up to $500 if you file singly, up to $1,000 filing jointly.

More in this category: « Veteran Medal Recipient Benefits from Spirit Of One Team
back to top