Catholic Charities assists refugees and immigrants that are legally in the United States. Our Refugee Resettlement program supports refugees who flee their country of origin, often running from violence, war and persecution, to save their lives. They are granted refugee status by the United Nations due to a well-founded case of persecution and cleared for entrance to America by our Department of Homeland Security.

Our Immigration Legal Services team helps reunite those in the U.S. legally with minor children and spouses who remain in their country of origin. Many of those we assist are refugees — those granted refugee status by the United Nations and invited here by the U.S. Federal Government — to reunite with their spouses and minor children. We also help U.S. citizens and those with legal residency secure residency for their spouses and/or children. 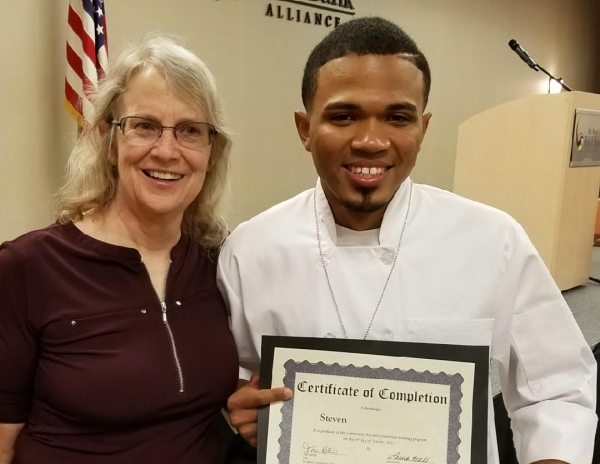 Steven was just a teenager when he made the long trip from Honduras to the United States. Both of his parents had passed away and he worried what would come of him.

Though young, Steven had dreams of becoming a chef. He knew his only hope was to leave Honduras, a place known for poverty and having the highest murder rate in the world.

Foster Care in a New Country

Steven entered the Unaccompanied Minor Program (UMP), a program that places foreign-born children who come to the United States without a legal guardian and enter into foster care.  He met Karen Winemiller, a former English language learner teacher and long-time foster parent for Catholic Charities.

Karen has been providing foster care services for more than 30 years for children from more than 20 different countries. “I try to treat each child as if he was my son, and Steven is no exception. I do my best to meet the needs of each individual that passes through my front door,” said Karen.

To Steven, Karen will always be a real mother to him. She supported him since the first day they met, through high school and later as he participated and completed the St. Mary’s Community Kitchen Culinary Program.

This fall, Steven entered the Catholic Charities independent living program. He no longer lives with Karen, but always plans to stay in contact with her. As an independent living client, Steven will learn to live on his own and get support when needed to learn life skills like budgeting, paying bills, etc.

Hope for a Bright Future

Steven is close to making his dream of being a chef a reality. He got a job working 30 hours a week at a local restaurant and continues to build his skills in the kitchen and in life. He knows he has a network of people who believe in him and support him.

Catholic Charities is incredibly proud of the young man that Steven has become and is extremely grateful to Karen Winemiller who has made a profound difference in the lives of so many refugee and immigrant children.

Would you like to learn more about students like Steven? Catholic Charities is always looking for more people interested in becoming foster parents to foreign-born children. Call 1-855-316-2229 or email Brandi Hale at This email address is being protected from spambots. You need JavaScript enabled to view it..

More in this category: « Refugee Finds Success and Gives Back to Others Transitional Generation »
back to top