Catholic Charities is committed to helping individuals and families experiencing homelessness find affordable, stable housing. Our team helps veterans and their families, people with severe mental illness and others who need shelter. We have multiple programs to help homeless persons throughout Northern Arizona. 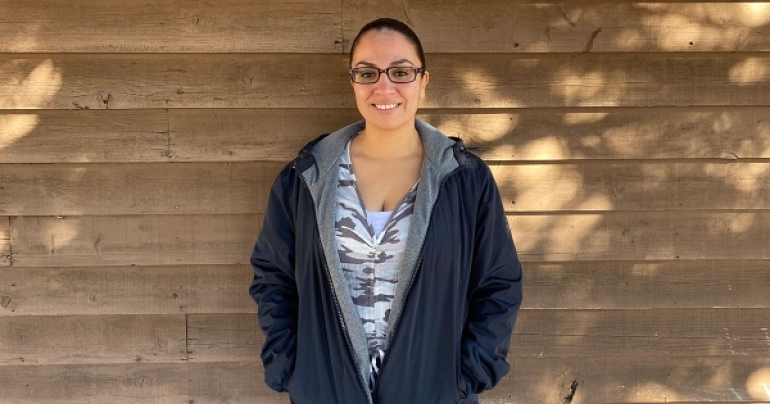 When Myesha walks into a room, she carries herself with such confidence that one would never guess the pain of what she has experienced. She is a survivor of generational abuse and addiction who has found happiness through healing and growth.

“I wanted to break the cycle of addiction. I didn’t want to be another statistic,” Myesha says.

Growing Up with the Horror of Addiction

Articulate and outspoken, Myesha tells her story in a way that captivates the heart and soul. Born and raised in Flagstaff, Ariz., she came from a family of abuse, addiction and alcoholism. The sickness of addiction that had affected her entire family soon held her firmly in its grasp.

Myesha left Flagstaff at 18 and moved around for a few years. She got clean and gave birth to two children before falling back into addiction. About five and a half years ago, she returned to Flagstaff and got married. Myesha’s husband only perpetuated the cycle of abuse her family had inflicted on her, so she divorced him and moved out on her own.

Then, tragedy struck again. Myesha was arrested while her children were home alone, which led to the Department of Child Safety (DCS) getting involved. By this time, she was a mother of three. Her two older children were removed from the home, while her third child was living with her ex-husband.

Winning the Battle Against Addiction

Unfortunately, Myesha got pregnant with her fourth child while still addicted. Her daughter was born substance exposed, triggering DCS involvement yet again. Her heart broke to pieces when her two oldest children were removed and placed into foster care. Her daughter was placed under the care of her ex-husband.

Myesha was tired of making the same mistakes. She went to treatment and then lived in a sober living house. After showing progress and staying on track with probation, she was allowed to do visits with her two youngest kids.

“I think without the obligation of being on probation, going through the visits would have made me relapse. I stayed sober through it,” she says.

She had finally proven to herself how resilient she could be. It all paid off when she got her two youngest kids back. She and her children then received shelter through Hope Cottage while working toward permanent housing.

Inspiring Family to Break the Cycle

Myesha was astounded that her life could turn around so quickly. In December 2021, she got an apartment through Catholic Charities’ Permanent Supportive Housing (PSH) program and was working consistently. Her DCS case was closed shortly after. She says the positive encouragement from her Catholic Charities case managers and DCS worker echoed the strength she always knew she had.

Now, she has been sober for over a year and a half. Her story has inspired her relatives to get sober and break the cycle that has plagued her family since childhood. When her family members saw how happy she was, Myesha encouraged them to get on the right path.

“Addiction is a disease and it’s so powerful, it’s scary,” Myesha adds. “I’m doing what I can for my kids with the hope that one day my two older kids will come back.”

Please help others like Myesha by donating on Arizona Gives Day.

More in this category: « Housing Case Manager’s Strong Commitment to Her Community Seasonal Dangers of Homelessness »
back to top