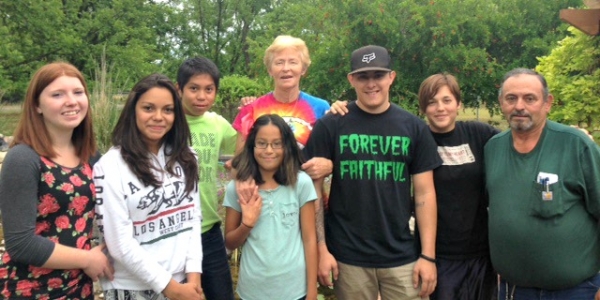 After raising three biological children, Darlene and her husband, Bill, decided to become foster parents—a journey that led them to adopt five children, four of which are teenagers. They also have two more adoptions pending. In addition to adopting, they have fostered hundreds of children over the last 20 years.

Another Opportunity to Parent

At age 57, Richey says she doesn’t want to sit around getting old. Instead, you’ll find her in the kitchen with her adopted and foster teens baking cakes, learning the latest dance moves and teaching them life skills. Richey first began fostering in Winslow, Ariz. At the time, she owned her own child care facility and her biological children were grown. “My house was empty,” said Richey, “but I wasn’t done parenting.”

Life changed when one of the children at Richey’s child care facility was found in a devastating situation—a 2-year-old named Elizabeth was orphaned after her mother was found dead. Richey and her husband got licensed as foster care parents to adopt the toddler. Elizabeth is now 19 and setting off for college to become a social worker.

That one time turned into hundreds of times, as children in need of a safe home kept coming. As they continued to foster, Richey was glad she chose Catholic Charities. When originally researching for what foster care agency to partner with for licensing, Richey kept hearing about Catholic Charities. “A worker at the Department of Child Safety recommended Catholic Charities, so that’s who I went with, and I won’t ever change,” said Richey.

Now living in Camp Verde, Ariz., Richey is still working with Catholic Charities. When asked if fostering is tough, she answers, “I enjoy being around kids. People say you shouldn’t get attached, but I do,” says Richey. “Once they come into my house, I consider them my kids. They aren’t foster kids to me, they are my kids. It gets better the more you foster, and as long as I can do it, I’ll be taking care of kids.”

If you’re thinking of fostering, Richey has some advice for you, just take the first step and look into it. You may be surprised at how great an experience it will be for you.

Anyone interested in becoming a foster parent can be licensed in as little as three months and the state is very flexible about who may be licensed.  You can be married or single, rent an apartment or own a house. If you work, you can get assistance for day care.

Couples or individuals interested in foster parenting should start by contacting Sally Gramke at Catholic Charities by emailing This email address is being protected from spambots. You need JavaScript enabled to view it. or by visiting the Arizona Department of Child Safety website www.azkidsneedu.gov.

More in this category: « Insider's Look into Foster Care Empty Nesters Take on Foster Care »
back to top