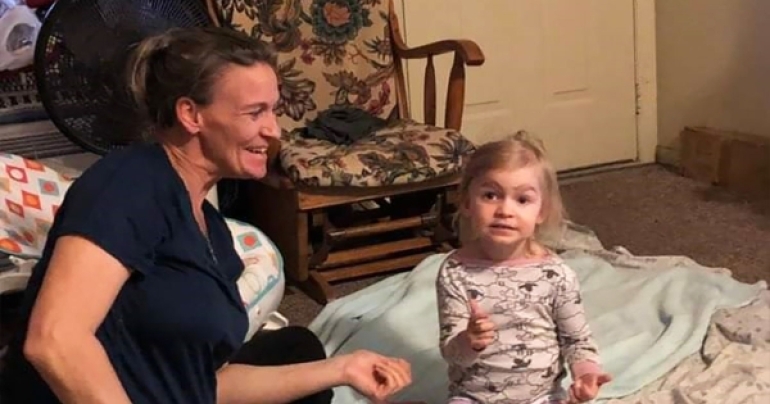 From the early age of 12, addiction played a heavy influence in Serra’s life. For years it had her wrapped around its finger, unwilling to let go. As she grew to be an adult, her addiction began to seriously affect her life.

Facing the Consequences of Addiction

Serra’s battle came to a head when she ended up in jail and DCS (Department of Child Safety) involvement put her at risk of losing what was most important to her, her one-year-old daughter. She realized the possibility of spending the rest of her life incarcerated, and it devastated her.

Her first week in jail proved to be one of the most heartbreaking experiences of her life. She was consumed by negative thoughts that ate away at her, leaving her in pieces. But Serra was not ready to give up hope that her life could change.

“I fell to the floor praying and asking for forgiveness to help change me and break my addiction,” she said.

Hoping for a Better Life

After spending eight months in jail, Serra was released. She had no idea how she was going to do it, but she was determined to stay clean. The hope that had kept her going in jail was growing, like a match set ablaze. She was ready.

Serra got to work doing whatever she could to stay sober, finding support and guidance from the Arizona Families F.I.R.S.T. (Families in Recovery Succeeding Together) program. The program assists parents with addiction to substances who are referred by DCS in navigating resources to achieve sobriety. After regaining custody of her daughter and having her case closed, she sought an aftercare plan to help her stay on this difficult, but rewarding, path.

Now seeing the light at the end of the tunnel, Serra learned coping skills and how to maintain healthy boundaries, which brought peace and stability to her life. Having the support of her case worker, Amber, made all the difference.

Today, Serra is no longer the tormented mother who sat in jail wondering if her life was over. She has been clean from drugs for over a year and a half and has had a job for nine months.

“I was able to complete every class with success. [I got to] regain custody of my daughter, watch the birth of my granddaughter, get a place to live and rebuild a relationship with my family,” she added.

After realizing her true strength in beating her addiction, Serra hopes her story will help others realize that it’s possible to gain happiness through sobriety. It’s a challenging journey but finding freedom from addiction is worth it.

If you’d like to support parents working with Arizona Families F.I.R.S.T. to change their lives, check out our Amazon Charity List. Donations as simple as a box of diapers or some cleaning supplies can make a difference.

More in this category: « Recovering Addict Expresses Thanks for a Second Chance Mom Finds Strength After Conquering Addiction »
back to top