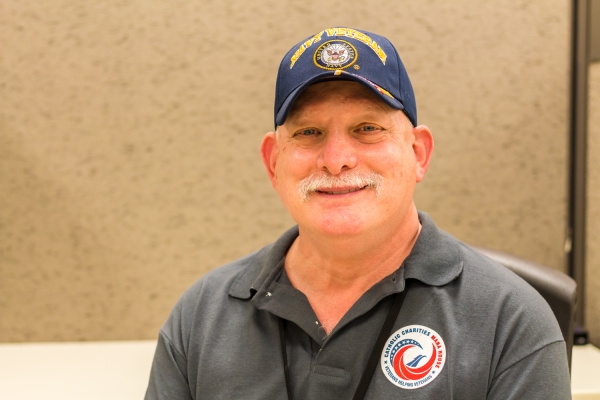 Will at the Veterans Outreach Center.

You would never expect to find a chief operating officer homeless, but that is exactly what happened to Will. Though he dropped out of high school to join the Navy, he got his GED shortly after his military service ended.

After that, he continued his education and ultimately completed two degrees. Will’s ambition led him to California for 7 years before he came back to Phoenix. During those years after university, he tackled different industries. He worked in food service for 12 years and even owned his own restaurant, he also worked in real estate for 11 years. Finally, he ended up working in a mental health facility. He loved this work and advanced through the ranks becoming the chief operating officer.

Eventually everything around him started crumbling. “I was so exhausted. I could not go on. I had a nervous breakdown,” said Will. He admits that challenges with his own mental illness, paired with the exhaustion contributed to what happened next.

“I was homeless, I had my own basket with everything I owned. The irony was, I was homeless only a few miles away from where I had graduated. It doesn’t seem right that a college graduate could become homeless.” Will lived on the streets for about 4 years.

At one point Will got back on his feet but that didn’t last and he ended up homeless again. This time was different, he got very sick and almost died. “I crawled to the VA (Veterans Administration). I literally crawled into the emergency room. When I say crawled, I mean crawled on all fours, I was in so much pain and couldn’t even stand.” Will made it about a mile to the hospital and found help. He spent 5 days at the VA hospital in recovery. “I was getting released that day and didn’t know where I was going to go. I just knew I was going to be homeless. The VA contacted MANA (Marines, Army, Navy, Air Force) House and I was accepted immediately.”

“MANA House saved my life,” said Will. “I stayed at MANA House for 6 months. They were outstanding for me. I couldn’t ask for better guidance, structure, and support. They pulled me out of my shell.”

Will moved into a one-bedroom apartment after leaving MANA House but the case management support continued after he left. He learned about the Senior Community Service Employment Program (SCSEP) and began volunteering. “It was MANA House that gave me the hope.”

Now, one year later, he continues to serve at the MANA House Veterans Outreach Center at the Human Services Campus. He specializes in helping veterans start the intake process so they can begin finding services. He can relate to veterans coming to the VOC because he was once in the same situation. “I love when somebody comes in and I can offer them services and they accept help.”

Will turns 66 years old soon. “I’m trying to decide what I want to do now. I want a job where I can give back to the community and use my skills to make a difference.”

Help support veterans like Will by becoming a monthly supporter.

More in this category: « Air Force Veteran is Determined to Thrive Veteran Medal Recipient Benefits from Spirit Of One Team »
back to top