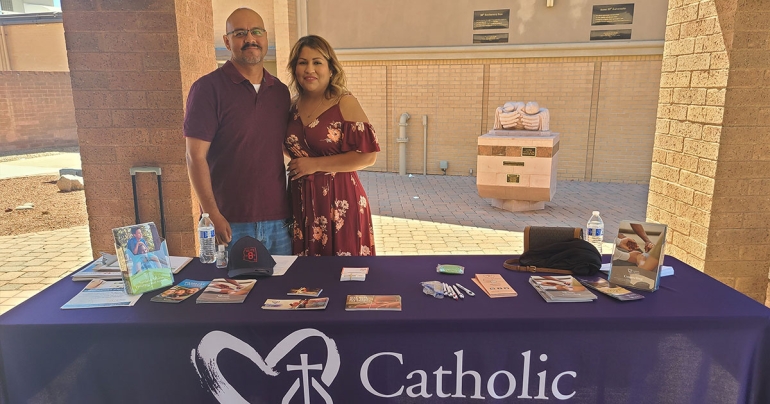 When Parish and Diocesan Engagement Manager Dulce Valdez first started at Catholic Charities in 2017, she had no idea she’d help bring an idea to fruition that would impact so many lives. She had heard talk of starting an ambassador program with individuals who would be called “Champions.” These Champions would educate the community about Catholic Charities’ mission and services.

Many people Dulce encountered had heard of Catholic Charities but weren’t aware of the broad array of services being offered. This all changed when Kevin O’Donnell, a volunteer, worked with Dulce to bring the Champions Program to life.

As the program grew, Dulce learned more and felt empowered to share her work. As such, the Champion motto reflects this sentiment: “A Champion at Catholic Charities is someone who learns about what we do and shares it with others!” As the role of the Champions began to evolve, the team decided to specify volunteers working in parishes as “Parish Champions.”

Roles of a Champion

Dulce’s passion for spreading God’s word resonated with Greg, a Champion in Chandler, Ariz. “I am enthusiastic about all the help and support and good available via Catholic Charities. I enjoy engaging people in conversation or via announcements at masses,” he said.

Gathering Together in Christ

The program is thriving, with over 40 Parish Champions from 20 different parishes. “We still have much more to do because there is a lot of need, but I think we’re doing a great job as a team. I ask God to fill all of us who want to serve Him with strength and health,” said Graciela, a Champion at St. Augustine Parish.

In August 2022, the team had its first Champions Retreat. Dulce and the Champions enjoyed coming together to understand their mission and fill their hearts with compassion for those they serve.

The Champions were blessed by the guidance of Sr. Betty Banja from the Sacred Heart of Jesus Order and Catholic Charities’ Refugee Resettlement Program. She delivered a touching message about times when she encountered Christ in others and they encountered Christ in her. Her words were central to the mission of a Parish Champion.

Champions Affirm the Dignity of the Most Vulnerable

A Parish Champion recognizes the dignity of each person. “Being a Champion is important to me because I can bring the peace and mercy of Christ to those in need by sharing the various support services offered by Catholic Charities,” said Doug, a Champion with Ss. Simon and Jude Parish.

Catholic Charities encourages those interested to become Champions in their parish, place of worship and their community. If you are seeking purpose and compassion, enjoy learning and have the heart to serve, contact Dulce Valdez at 602-650-4832 or This email address is being protected from spambots. You need JavaScript enabled to view it..

More in this category: « Southwest Gas Cultivates a Culture of Philanthropy Celebrating 89 Years of Service »
back to top