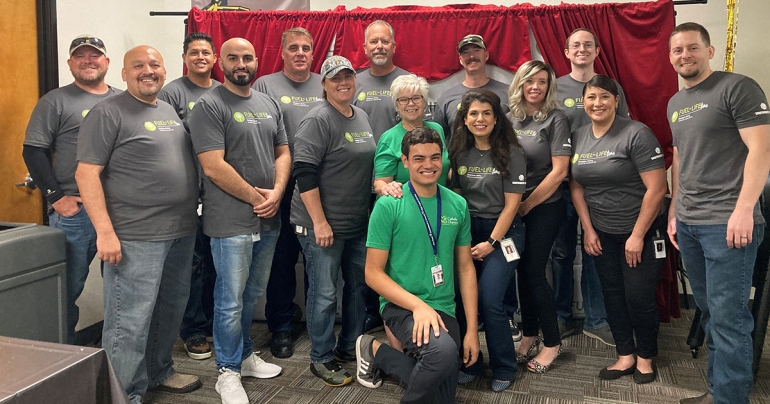 For some, giving to a nonprofit means making a one-time or monthly gift and not necessarily knowing how the donation is making a difference. However, creating a culture of philanthropy involves not only reaching those who feel passionate about a cause, but also showing them how they are making an impact and expressing gratitude for their support.

Although donors may be aware of a nonprofit’s mission and the services provided, they may not know how those services are funded. At Catholic Charities, funding comes from state and federal grants, individual and corporate donors, tax credits, legacy and planned giving, employee giving programs, and more.

Southwest Gas’s FUEL for LIFE Program has been partnering with Catholic Charities since 2016. Its employee-led giving program, managed and presented by employees, educates staff and encourages them to get involved with nonprofits.

In the past 11 years, Southwest Gas has served over 1,800 nonprofits in their service area, investing $17 million in the communities where they live and work. The employee giving program touches all populations, including agencies that serve veterans, foster families, food banks, animals, and women in crisis.

Funds go where they’re needed most. By the end of the year, FUEL for LIFE will have invested over half a million dollars in Catholic Charities programs.

Wendy Owens, Catholic Charities Resource Development Manager, is grateful to Southwest Gas and all their support. “Southwest Gas FUEL for LIFE program has been a tremendous partner. We are so pleased to be able to work with them to strengthen our community through not only financial funding, but also increasing awareness of programs. A lot of their employees are out and about in the community and often see people who need help. These employees are educated on services and partners that are in the community and can provide referrals to organizations like Catholic Charities. The support of corporate leadership is vital and allows the FUEL for LIFE program to grow and change to meet the needs of their staff and the community. We are so proud to partner with them,” said Owens.

Because of the generous employees at Southwest Gas and their continued support of Catholic Charities programs, we are pleased to congratulate the Southwest Gas FUEL for LIFE program on the prestigious 2022 AFP National Philanthropy Day Organization of the Year award. This award is given to only one Phoenix area corporation each year.

Norma Gutierrez, Sr. Manager Public Affairs and sponsor, wants employees to know more than just the names of the nonprofits they work with. Every year, Southwest Gas sends an employee group out to each nonprofit to learn about what they do and how their work benefits the community. Those in the group then present about the nonprofit to the other employees, including ways to give, such as tax credits.

Recently, they visited the Care Campus in Mesa, Ariz. to learn about the many programs Catholic Charities provides. They also learned about the story that inspired Care Campus and the Emergency Santa Program, which provides Christmas gifts to children in low-income families.

Giving is just as impactful for Southwest Gas employees as it is for the nonprofits receiving their gifts. The employee groups that visit nonprofit locations bring home inspiring stories about what they saw.

Although those in employee giving programs may not fall under the category of “people in need,” that doesn’t mean they aren’t touched by the nonprofits they give to. Some Southwest Gas employees have fostered, adopted or received counseling services through Catholic Charities.

Catholic Charities is grateful to Southwest Gas and its employees for joining us as we walk alongside the most vulnerable on their path to stability.

More in this category: « Serving the Community Through Prayer Catholic Charities Champions Serve God in Others »
back to top