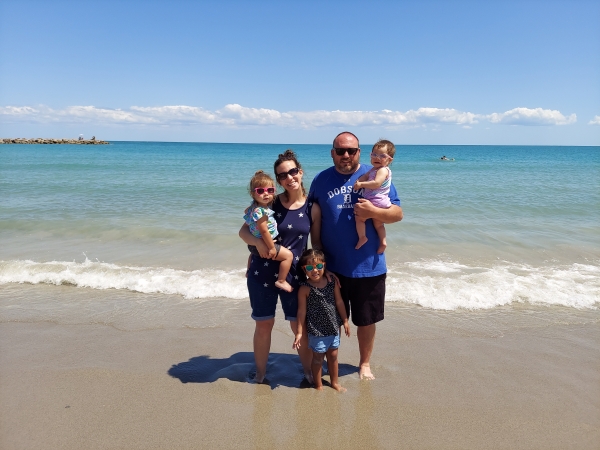 For Bob and Becky, foster care and adoption are more than choices, they are a calling. “When we first started dating, I asked Bob if he would be open to adopting,” said Becky. “It was on my heart since I was a child.”

Bob lost his mother as a teenager and struggled as he moved from place to place. He always wanted to help kids and provide love and stability to children in crisis.

In 2018, Becky and Bob took the first step toward becoming foster parents by attending a Foster Parent Orientation. These information sessions can occur in person or online and explain the steps necessary to become foster parents.

They chose Catholic Charities as their licensing agency and began the licensing process. This process is designed to make sure children in foster care will be cared for by safe adults and includes background checks, a home study, classes and more.

In October 2018, they were licensed as foster parents. They found out when they were on vacation and told Catholic Charities they would be ready on Monday when they were back from their vacation. Becky and Bob knew that being on the list didn’t mean they would get a call right away. It could take days or weeks for a child to need them.

Monday came and Becky got a call from their Catholic Charities case manager. There was a sibling group who needed a home. Becky called Bob and told him about the call. They were shocked to have gotten a call so quickly, so they weren’t quite prepared. They didn’t have any of the necessary equipment for the children, so they asked for one more week to get ready.

The next day Becky received another call from her case manager. She said that she knew she needed more time but there was a 10-month-old little girl who needed a home. “Something was different,” Becky said. Bob knew it too. They both felt like they needed to say yes.

Becky told the case manager, “Nothing has changed since yesterday. We still have nothing ready. We will figure it out. God provides.” With the help of friends and family, they had everything they needed in the next couple of hours. They were ready. They drove over and picked up Sophia.

From the beginning, Becky and Bob have been intentional about cultivating relationships with their foster children’s biological families. Sophia was the first child in their care, and they became close with her biological mother, and later her extended family. They knew that building a relationship with biological family members would be best for Sophia no matter what happened in the future.

Sophia’s biological mother was working hard to get Sophia back. After a few months she revealed to Becky that she was pregnant again. After giving birth in the spring of 2019, the girls’ biological mom invited Becky and Bob to the hospital to meet Isabella. The next day, they received a call asking them to foster Isabella.

Becky and Bob understand that it is devastating for children to be separated from their family, even when it is necessary for their safety. They were happy that the sisters, who are only 16 months apart in age, would be able to stay together. Eventually, their biological mom decided it would be best if they were adopted by Becky and Bob.

When Becky and Bob first became foster parents, they were open to adopting but it wasn’t their goal. They wanted to be faithful and do whatever God would call them to do. They didn’t know if they would be one of those families who foster dozens of children or adopted a few. They just wanted to be faithful.

In March 2020, five months after Sophia went to live with a biological family member, Becky and Bob received a call that there was a sibling set that needed a family, and they welcomed an infant and a toddler into their home.

In April, they officially adopted Isabella. They didn’t know what the future would hold, but they knew Isabella was their daughter.

One day, Becky had taken Isabella to lunch with her biological mom. On the drive, Becky had a feeling that she needed to have a very candid conversation with her. In the past, the girls’ biological mom had hidden her pregnancies. Becky told her, “If you ever find yourself pregnant again, please let us know. I don’t want you to walk through that alone. If you feel like you cannot parent, we can help. Don’t make any drastic decisions.”

Sure enough, a few months later, the girls’ biological mom revealed that she was pregnant and had been when they went to lunch and had their candid conversation. She had planned to have an abortion a few days later but canceled it after their talk.

Emma was born in July 2020 and was immediately placed with Becky and Bob. She is 14 months younger than Isabella, and they now have four children under the age of 3 living with them.

In September 2020 a true blessing came; Sophia came back to them. Becky’s mom moved in to help. With five children under 3 years old, they needed all the help they could get. In October, the other sibling set was able to reunify with their biological family.

Sophia had experienced more upheaval than any child should. She had spent most of her life with Becky and Bob. In December 2020, the same month she turned 3, she was officially adopted by the couple.

Only a few months later in March 2021, Emma was also adopted.

“We have only been fostering for two and a half years, and in less than one year, we’ve adopted three sisters,” said Becky. “It’s proof that God has a sense of humor.”

Growing Your Family and Faith Through Adoption

Not only have Becky and Bob’s family grown by three daughters, it has also grown with the girls’ biological families and all of their friends and family who have helped along the way. “We knew we wanted to help kids, but what it has done for us is immeasurable. Our faith, friendships and connections are stronger.”

Bob admits that becoming a father is frightening. “When we brought Sophia home the first time, I had never changed a diaper. A few days later I was home with her by myself for the first time. I held her and she smiled at me. My heart melted.” Now, Bob is the first one to hold all of their friends’ new babies.

Becky and Bob have closed their foster care license for now. They want to focus on their new family and love on their three little girls.

Fostering is not always easy. But as Becky and Bob know first-hand, it is a blessing like no other. Learn more about becoming a foster parent or find out about upcoming information sessions by contacting Sally at (602) 230-4910.

More in this category: « A Lifeline for Foster Care Families Reopening Their Hearts and Home »
back to top