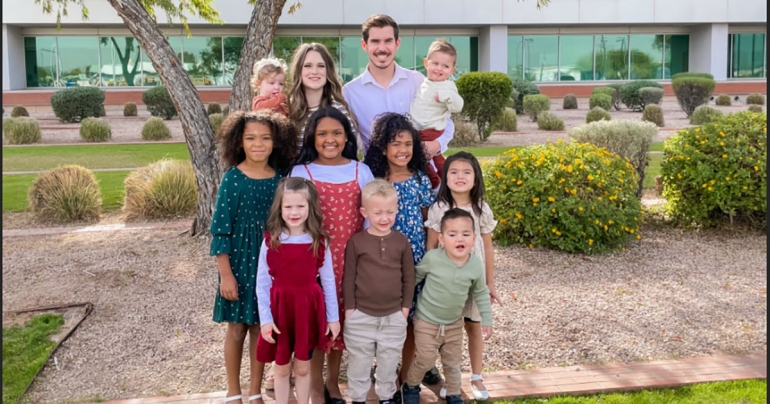 When Rick and Kim Brown got married, they knew they wanted a large family. Both were the youngest of seven siblings and loved the energy a big family brings.

After struggling to conceive, the couple was overjoyed when Kim became pregnant with their first child, a beautiful baby girl. However, Kim’s pregnancy was difficult, and doctors advised it would be risky to get pregnant again.

A Familiarity with Foster Care

Although Rick and Kim knew adoption was an option, they didn’t seriously consider it at first. Rick and Kim were already familiar with foster care, as Kim’s parents were foster parents and had cared for several children over the years.

At the time, Kim’s parents were caring for two little girls. The girls had been with the family for almost two years and were looking forward to being adopted.

Kim’s mom suggested that Rick and Kim’s home would be a perfect fit for the girls. The couple talked with Kim’s parents’ licensing worker, who also loved the idea of the girls staying within the family unit.

Rick and Kim contacted Catholic Charities’ Foster Care and Adoption program and started the licensing process. A few months later, Rick and Kim adopted the girls and officially became a family of five.

Working with Catholic Charities made the couple more aware of how many children needed a safe home. For the next two years, they fostered five different children, each of whom was reunified with their family.

Reunification as a Goal of Foster Care

They were then placed with three sisters. One of the little girls had a different father. The father of the two fought for his daughters and was awarded custody of them.

Kim was heartbroken that the sisters would be separated, but knew that everyone involved just wanted the best for them. She also knew the other little girl was meant to be theirs. A year later, they adopted her.

Over the next year, Rick and Kim cared for six children. Two of them, a girl and a boy, became a part of their forever family.

The family was still fostering a little girl, whom they later adopted in May 2022, when they were called to care for two little boys. The boys had been in another foster home together and the state did not want to separate them.

A Dream is Fulfilled

Kim felt in her heart things would work out for the best. They ended up adopting one of the boys in October 2022. In November 2022, they adopted the other boy and a sister who was placed with the family after she was born.

Rick and Kim now have nine children and enjoy watching them grow in a nurturing household. “We did not go out looking for our children, but they came looking and found us,” says Kim.

Catholic Charities’ Foster Care and Adoption program makes miracles every day by placing foster children in loving homes throughout Arizona. If you’re interested in supporting our work, donating online or providing needed items through our Amazon Charity List are easy ways to help.

Read 757 times
Published in Foster Care/Adoption
More in this category: « Prayers of Becoming Parents are Answered
back to top