Prayers of Becoming Parents are Answered 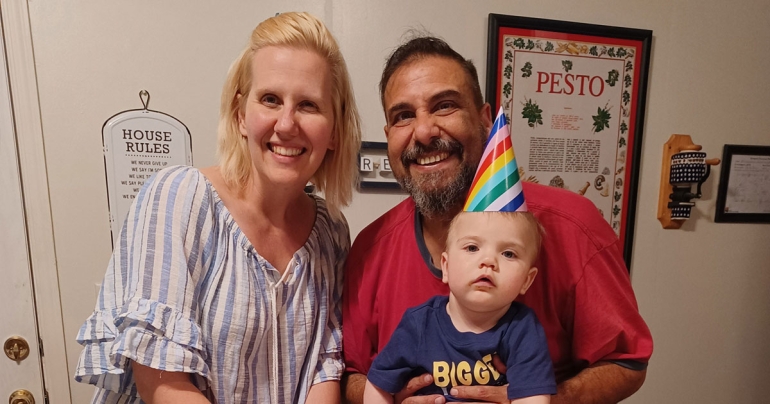 Bullhead City residents Stacie and Armando always knew they wanted to become parents one day, but when Armando’s cancer returned last year, Stacie knew it wouldn’t be possible for them to have biological children. The couple had considered fostering and adopting but it wasn’t until Stacie, a Licensed Professional Counselor with the VA, heard Catholic Charities staff share about their Foster & Adoption Program at an outreach event that she became serious about the possibility.

The Right Place at the Right Time

“We had been thinking about adoption since Armando’s diagnosis but didn’t know where to start. I knew I wanted to finish my degree and get a stable job before starting the process,” said Stacie, “After I heard the Catholic Charities presentation, I waited six months before working up the courage to reach out. I was really nervous like ‘can I be a mom’? But God’s timing was perfect.”

Stacie and Armando began working with Amy Gregorich at Catholic Charities to become licensed foster parents. “Amy walked us through the entire process. I can’t tell you how many times she has helped calm me down or coached me through each step. Everyone we’ve met at Catholic Charities has been so supportive and so kind,” said Stacie.

Before long, the couple was matched with their first foster child, a baby boy named Richard, in May of last year. “We got him when he was two weeks old”, Stacie says with palpable joy in her voice, “I know it’s biologically impossible, but he has blonde hair and blue eyes just like me. The first time I looked at his hands, I thought, ‘I swear he has my fingernails.’”

With each passing day, Stacie and Armando fell more in love with baby Richard. They prayed for him, wanting what was best for Richard even if that meant returning to his biological family. It’s rare for foster parents to be given the chance to adopt their first foster child, and the couple didn’t want to get their hopes up.

Unsure of what the outcome might be, Stacie and Armando attended regular custody hearings. “It was so nerve-wracking going to court, holding my breath the whole time,” shares Stacie, “We prayed for this for so long. For so many years, I prayed that I would become a mom somehow.”

Stacie and Armando’s prayers were answered this spring when they were told they could adopt Richard. The couple changed Richard’s name to Nathan, meaning “God’s Gift” when they adopted him.

When asked what she wants other potential foster parents to know, Stacie replies “The most important thing to tell folks is even if you’ve been praying or hoping for a long time and it doesn’t feel like God is moving, he still hears you and he still answers those prayers, even if it’s a long time coming.”

Stacie and Armando’s lives have been changed forever, filled with love they never knew possible during a time when Armando’s health has been uncertain. “There’s so much joy in with the sad,” says Stacie, “It’s the coolest thing getting to be a part of Nathan’s life through this journey. Being that safe place. I know he’s safe with us and he’s so loved. Gosh he is so loved.”

Chelsea Buck-Leilich is the Marketing and Philanthropy Specialist for Catholic Charities Northern Arizona region. Chelsea has nearly 15 years of experience working with non-profit organizations. Since earning a Masters degree in Social Work from the University of Texas at Austin in 2013, Chelsea has worked primarily in marketing and fundraising. Chelsea has also completed the Harvard Business School Club of San Diego’s Not for Profit Management course.

More in this category: « Foster Parent College Prepares Students to Provide a Loving Home
back to top