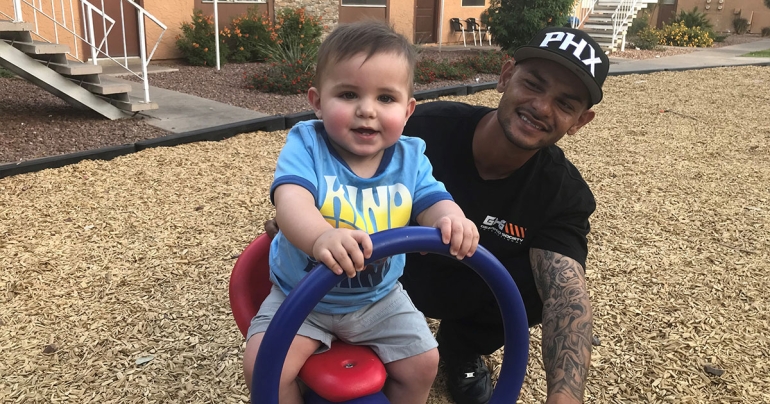 Parenting can be overwhelming. Trung Norris was a stressed father struggling to be a full-time parent after reunification with his 8-month-old son.

He was trying to figure it all out on his own and initially resisted help. Catholic Charities’ Family Connections program taught him how to build on his strengths and offered the support he needed to create a strong family unit.

Mr. Norris was referred to the Family Connections program through the Arizona Department of Child Safety (DCS). At first, he only participated because he was required to, but over time he realized how helpful the program was.

A Catholic Charities team member known as a Family Connections Consultant (FCC) gave Norris “someone to talk to weekly, someone to offer support, and someone who truly cared about me and my family.” It showed him that his family mattered , and it helped him out of a tough situation.

The Family Connections program is a change-focused intervention designed to lead families toward their goals through individualized sessions that teach problem-solving, create genuine relationships, offer guidance on handling feelings, stress and anger, connect with emergency and other services and empower caregivers during a time of change.

Examples of connections to support include:

Sabrina Walton, Program Manager of In Home Services, Family Connections and Nurturing Parenting, stated, “The goal is to guide families on a path, so they feel confident and empowered to make a behavioral change”.

Family Connections provided Mr. Norris with a set of resources designed to meet his unique needs. He was given a new car seat for his son along with diapers, wipes, baby clothes and hygiene products.

He and his FCC developed a realistic budget and found areas to save money. A Crock Pot was given to him as a means to cook at home. They also added basic kitchen supplies, such as plates and utensils. Mr. Norris learned how to look for sales on items, create grocery lists and began packing his lunches for work.

His FCC also guided him after his reunification case and helped him understand court terminology.

When asked how he feels after participating in Family Connections, Mr. Norris said, “I feel better mentally and financially. I feel more stable and knowledgeable of the resources out there for me. I have a better understanding of how to parent. I am less stressed and now have ways to respond to my stress if I am feeling overwhelmed at times.”

You can help parents like Mr. Norris by purchasing items from our Amazon Charity List. These items are given directly to clients to support their efforts to provide a safe and sanitary place for their children.

Read 373 times
Published in Family Preservation
More in this category: « Mom Finds Strength After Conquering Addiction Loving Mother Breaks the Cycle of Addiction »
back to top