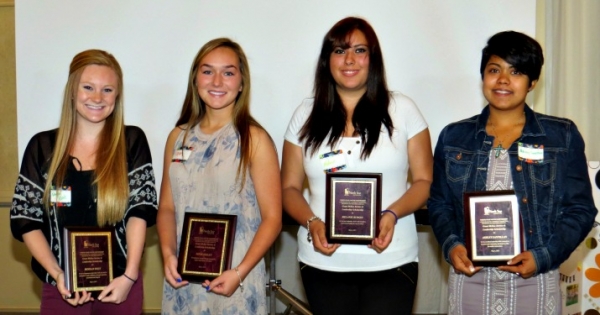 ·         Ashley Santillan has taken the PAL group to a new level of school service, working with freshmen students and integrating awareness programs for healthy living with the entire school.  Ashley is also involved in the National Honor Society, Science National Honor, volleyball and volunteers with her church on a regular basis.  Ashley plans to become an Officer Nurse in the Navy. She has interned at Senator McCain’s office, volunteered at the VA Hospital and Yavapai Regional Medical Center and in programs that help feed the homeless.

·         Melanie Burges struggled in school and considered dropping out before entering the PAL training. Now she takes care of children with autism and is involved in the police explorer’s program, sports and student council president at Prescott Valley School.  Without PAL, Melanie says she would not be graduating, would not be feeling so positive about her future and would not be looking at the bright side of life. “Thanks to PAL I can live the life I dreamed of living,” says Burges.

·         Piper Seeley has had the opportunity to travel to many other countries which has allowed her to learn about and understand other cultures.  With more than 100 hours of community service this year, she has learned compassion for the less fortunate and those in need. “My life experiences have not only made me a competent leader, but they have also taught me to be tolerant and understanding of others,” says Seely.  Piper’s involvement with PAL, Jr. ROTC, student government at Prescott High School, soccer and volunteering at several local organizations has resulted in her making a difference in her school and community.

·         Morgan West has a huge heart for people and loves helping others.  A few months ago, Morgan was part of an outreach program called Mission 4 Character in Uganda.  This program introduces 40 Biblical principles such as truth, respect, and integrity that are utilized in most schools, organizations, and many levels of government throughout Uganda. As co-leader of the Prescott High School PAL program, Morgan helped the group in two major projects this year including a sock drive and Breaking Boundaries.