North Star Youth Partnership engages youth ages 11-18 through educational, recreational, leadership and service-learning opportunities. What started in 1997 as an educational program to prevent adolescent pregnancy in Yavapai County has expanded to 11 different programs serving youth in Central and Northern Arizona. 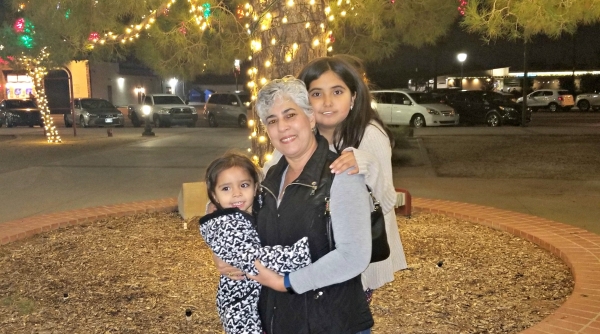 Bessy with her daughters
“She is clothed with strength and dignity; she can laugh at the days to come. She speaks with wisdom, and faithful instruction is on her tongue.” -- Proverbs 31: 25-26
“She wanted to be an astronaut,” says Bessy Ulloa, mother to Alicia and Aiyana, both graduates of Westside Head Start, a program of Catholic Charities focused on early education and school readiness for low income children. “But when she found out that she would be away from us for six months or a year, she decided maybe that wasn’t such a good idea.”
While any mother would be proud of a daughter with her sights set on space, Bessy is beaming with pride and joy because Alicia loves her so much she doesn’t want to be without her. Bessy, like so many grandparents and relatives today, became a mom to young children, for the second time, just when she thought she was ready for retirement.
Sisters Alicia, 8 and Aiyana, 4, have been through the kind of trauma that no child should have to go through, and have now come out the other side as happy, healthy and very loved children, thanks to Bessy. But, it certainly wasn’t an easy journey.
“There were times when I thought, ‘I don’t think I can do this,’ and I would cry and cry,” she says. “But, I wouldn’t change anything now. The girls and Guillermo (her husband) are my family and my life. Guillermo would step in and take over when I had had enough, so I could take a break. It was how we made it.”
Bessy’s difficult, but rewarding, journey started when Alicia and Aiyana were both taken from their birth mother by the Department of Children’s Services (DCS) due to her continued drug abuse and neglect of the children. At 17 months old, Alicia had been living in hotel rooms, and was at times, homeless. That’s when Bessy got the call that changed her life forever.
Alicia’s birth mother, a relative, recommended Bessy as someone who could temporarily care for the children while she tried to sort out her life. Alicia arrived in her foster home with no shoes, no clothes …  not even diapers. From the beginning, Bessy was determined that Alicia would know the love of a mother and a real family.
Bessy and Guillermo had each raised their own children into responsible adults from their previous marriages. They met and were married in 2010 and were just enjoying life as newlyweds when they started fostering Alicia.
The Ulloas took Alicia to visit her birth mother many times throughout the months as DCS worked to prepare Alicia to return to her. But, that wasn’t to happen. The Alicia’s birth mother’s life continued to spiral out of control and the Ulloa’s were grateful to be able to adopt Alicia.
“We’ve always been open with her about her adoption, and she knows how much we love her,” says Bessy. “She knows she has two moms, but she has worked to try and forget some of her past and now focuses on the future.”
The couple moved from California to Arizona with Alicia and on the recommendation of children’s services, they enrolled her in Westside Head Start, which is one of the best decisions they’ve made, says Bessy.
Alicia thrived in Head Start. She soaked up everything she learned and grew her social, emotional and cognitive skills every day. She graduated Head Start, and with Bessy’s love, affection and care, has grown into a well-adjusted third grader who is excelling in school.
Bessy and Guillermo went through the same experience with Alicia’s sister Aiyana just a short time later. However, Aiyana was older, 2 ½, when she arrived on their doorstep. Bessy found herself even more challenged raising Aiyana, who struggled with separation anxiety, behavior problems and fears. Bessy persevered and the couple once again adopted the child.
After seeking counseling and help in learning how to cope with Aiyana’s issue, the couple enrolled her in Westside Head Start, where she has become a different child … one who is confident, expresses her love for her mom and dad, and who has developed a great love for reading and school.
Bessy says that motherhood the second time around has been different, but amazing. She’s now able to enjoy all the little things she didn’t the first time around, like taking them to the park and school. She loves to drop them off and pick them up with Guillermo every single day. And, she loves to buy clothes for the girls, having raised boys the first time around.
With the help of Westside Head Start, Bessy is the best mother she can possibly be, and enjoying every single minute of life with her two precious girls.

More in this category: « Student Leader Invests in Others Is Your Child Ready to Stay Home Alone or Babysit? »
back to top