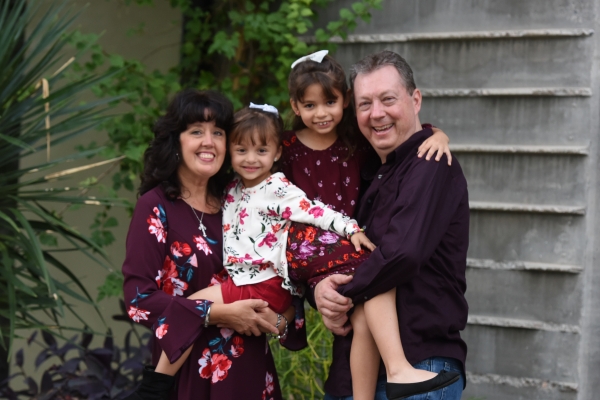 “This family journey was painful, but it’s better than a romantic story. It’s the best story I ever heard. It’s the story of how we became a family,” said Carlie, age 10 years old.

Dawn Marie and Robert are intimate with loss. Robert lost his father at a young age and Dawn Marie lost a son 20 years ago. Despite the loss, they have built a beautiful life together.

Biological sisters Carlie and Kateri also knew loss. Both girls were in foster care, but they had been in separate homes for a while. They were finally back together living with the Sampson family. The Sampson’s had adopted three children over the years and fostered dozens more.

Dawn Marie and Robert had just begun training to become foster parents. They knew of the Sampson family from church, but didn’t know them well. But they soon would find the inspiration they needed from this experienced foster family, which would change their lives for the better, forever.

The training that families take to become foster parents is intense. Thirty hours of training includes real stories of children who were abused, abandoned and/or neglected. Understandably, Robert was getting discouraged. After learning about the trauma that kids in foster care experience, he didn’t know if would be able to give a child what they needed, if he was cut out for it.

Dawn Marie could tell that Robert had doubts about continuing the classes to become foster parents. She prayed that God would provide a miracle in the next 24 hours.

A Prayer Is Answered

The next day, Robert stayed behind after mass to help his fellow Knights of Columbus with a pancake breakfast. He was about to leave when he ran into Brenda Sampson, an experienced foster parent, and her children. He asked Brenda how they handled becoming foster parents. Brenda explained that her husband to had wanted to run after the first class but stayed. She shared about the joy they have experienced as foster and adoptive parents and how grateful she was that he stuck it out.

Robert’s heart was at ease and a burden had been lifted.

Curious, Brenda asked if they planned to foster or adopt. He explained that they were open to both but would love to adopt. Brenda shared that though the sisters, Carli and Kateri, were in their foster care but they would need adoptive parents in the future.

Robert had met Kateri, the younger of the two sisters a week earlier, when out of the blue she ran up to him at church and jumped in his arms. They didn’t know each other but it made a big impact on him. Now, she was shyly hiding behind Brenda while Carlie regaled him with stories of losing a tooth.

In those moments, Robert fell in love with the girls. He went home, an hour later than expected, and told Dawn Marie about the encounter. She had seen Carlie only weeks before and been taken with her joy and beauty. It seemed as if seeds that had been planted in their hearts were beginning to grow. The miracle she prayed for had been answered.

Dawn Marie and Robert continued their classes. They accepted the uncertainty and prayerfully pushed ahead. Finally, the classes, the home study, interviews and background checks were all complete, months of preparation had prepared them to become licensed foster parents.

Their first placements, Carlie and Kateri, came to their home just before Christmas 2016. In September 2017, they became a forever family.

“We knew in our hearts we could provide for these kids and provide a strong foundation for their future,” said Dawn Marie. “You have to do the best for the kids. We can’t imagine life without them.”

Learn more about becoming a foster parent and how to support kids in care.

More in this category: « 3 Things Children in Foster Care Need Adopting Macy »
back to top