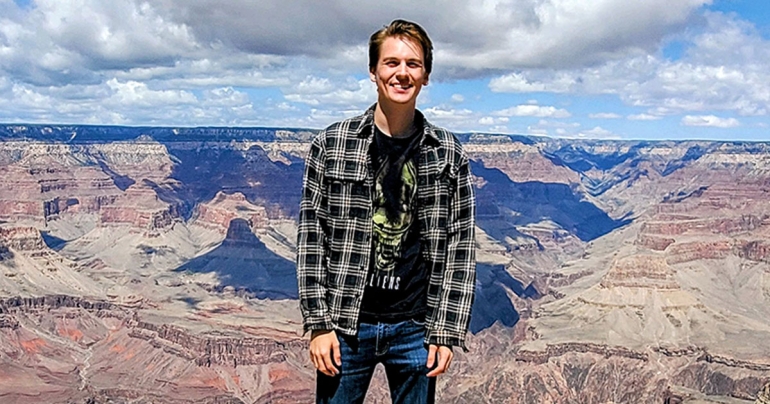 Growing up in a small town in North Carolina created a deep sense of community for Ben Hagaman. The son of a Baptist pastor, Ben understands the value of a close-knit, faith-based community.

“Being a part of a church family was a formative part of my upbringing. It meant being able to ask for help and having people that aren’t your relatives support you, care about you and care how you are doing in school,” said Ben.

After high school, he was drawn to Boston College, a Jesuit university where he earned a degree in psychology and learned about the mission and values of the Jesuit Volunteer Corps. Ben committed to a year of service as a Jesuit Volunteer (JV) and was placed at Rosewood Court, an affordable housing community in Phoenix, Ariz.

In his role as a resident services specialist, Ben strives to create that same sense of community through an after-school program for children and teens. “I try to make the after-school program an open-ended space to chat and debrief, because I feel like kids don't do that enough or even realize they need it,” said Ben.

During the height of the pandemic, when the after-school program couldn’t meet in person, Ben would create craft packs or other “grab and go” types of activities for kids to do from home. The kids love being able to meet in person again.

The after-school program has become a safe space for children in the community. Instead of being home alone after school until parents return from work, they can spend time with other kids and adults who care. “One of the older kids brings his younger brothers to the program, and after a while he got more involved and started helping. He is becoming a peer leader,” said Ben.

Rebecca Zeimet, Resident Services Specialist, works alongside Ben and can see the connection he is making. “It has been amazing to see how much the kids have grown and gotten connected to Ben! I have noticed kids giving back and helping to clean up around the complex.”

The program continued in the summer with a book club. About 90% of the kids who attend are boys, so Ben chose the book “How to Train Your Dragon.” Each week he reads a portion of the book, the kids create crafts like dragons and Viking shields, and they talk about themes from the story.

Sarah Hamilton, Resident Services Program Manager, was impressed with Ben’s dedication to the community. “Ben’s presence and person is exactly what is needed to create the kinds of spaces he seeks to provide for the kids. I have no doubt those hours he spent listening [to and] laughing [with] those young boys and girls will leave a lasting impact.”

Ben’s one-year commitment as a Jesuit Volunteer is coming to an end. He will be attending graduate school in Chicago to pursue a master’s in clinical social work. Ben credits his time at Rosewood Court with expanding his understanding of systemic barriers families experience and how they impact their stability and growth.

You can support our after-school programs in our affordable housing communities by purchasing items from our Wish List. There is always a need for snack and craft items.

Read 211 times
Published in Giving Hope
More in this category: « AmeriCorps VISTA Has Calling to Serve
back to top